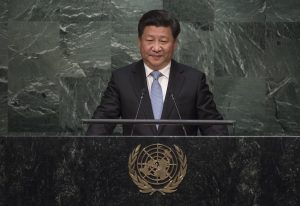 The founding myth of international law is the sovereign equality of its member states. How, then, can and should it accommodate the rise of one potential hegemon and the decline of another? This review essay discusses an important new book by Cai Congyan, of Xiamen University, that tries to reconcile an international rule of law with rising powers in general and the rise of China in particular. The larger theoretical project is less successful than a more immediate one, which is describing and explaining China’s instrumentalist approach to the rule of law at the domestic and international levels. Though the tone of the book is assured and reassuring, Cai’s diplomacy at times leaves some interesting questions unanswered — and a few crucial ones unasked. It is, nonetheless, essential reading for anyone seeking to understand how China sees and uses international norms and institutions.

Can international law survive a rising China? That is the central question in a provocative new book by Professor Cai Congyan. The Rise of China and International Law: Taking Chinese Exceptionalism Seriously (Oxford University Press, 2019) now sits alongside Judge Xue Hanqin’s Hague Lectures as essential reading for anyone seeking to understand how China sees and uses international norms and institutions.

The ascent of the Middle Kingdom has been a source of anxiety for Western international relations theorists for decades. When President George W. Bush entered the White House in 2001, the United States moved from referring to China as a ‘strategic partner’ to using the language of ‘strategic competitor’, with serious talk of a new containment strategy. The September 11 attacks pushed this off the table, as the United States focused its attention on counterterrorism and a controversial war in Iraq. That suited China perfectly. Having been exhorted by Deng Xiaoping in the 1990s to ‘hide brightness and nourish obscurity’ (韬光养晦), it developed its economy and embraced globalization, before presenting itself as open to the world in the 2008 Olympics. A month later, taikonauts on the Shenzhou 7 made China only the third country to complete a spacewalk. Days after that, Premier Wen Jiabao celebrated both events as evidence of ‘the great rejuvenation of the Chinese nation.’ All of this took place in the shadow of a global financial crisis that shook the certainties underpinning the dominance of Western economies and economic thinking.

By the time China was back on the US radar, towards the end of the Obama presidency, opinions were divided on whether China could ‘peacefully rise’ within the existing multilateral framework. Obama’s campaign platform had included language that ‘rising powers like China hold the potential to be either partners or adversaries’. Once in office, however, the focus remained on the partnership side. The 2015 National Security Strategy stressed that the ‘scope of our cooperation with China is unprecedented’ and that the United States ‘welcomes the rise of a stable, peaceful, and prosperous China.’

The election of Donald J. Trump put a stop to all that nonsense. Having campaigned on a stridently anti-China platform, his own National Security Strategy labelled China a ‘revisionist power’ bent on eroding America’s security and prosperity, in favour of a world ‘antithetical to US values and interests.’

International law is not — or, perhaps, most international lawyers are not — comfortable talking about matters of power. The creation myth of international law is the sovereign equality of states, enshrined in article 2(1) of the UN Charter as a founding principle of the Organization. (Twenty-five articles later, five of its notionally equal members are given a veto over decisions by its most powerful organ. In international law, as in life, some are more equal than others.) The discomfort is curious because the history of international law is scarred by power, from its legitimation of imperialism and colonialism to the through line connecting the mission civilisatrice with modern human rights. Unease may be due to implicit analogies with domestic legal systems, the Western traditions of which regard power-based arguments as anathema to the rule of law.

Chinese lawyers, by contrast, have always been clear-eyed about the role of power. In part this reflects a view of law as something that should serve the state rather than constrain it. Domestically, the Supreme People’s Court sits at the apex of the legal system but below the Chinese Communist Party (CCP). Yet it also reflects China’s experience of international law. ‘Unequal treaties’ imposed on China during the nineteenth century and the failure to recognize the People’s Republic of China for much of the twentieth encouraged a view of international law as an instrument that the powerful use against the weak. The period is sometimes referred to as the ‘century of humiliation’ (百年耻辱).

Speaking in 1996, President Jiang Zemin warned a CCP seminar on international law that China’s lack of knowledge of the discipline put it at a strategic disadvantage. He urged party members to enhance their skills and become ‘adept at using international law as “a weapon” to defend the interests of our state and maintain national pride’. This was five years before Charles Dunlap popularized the term ‘lawfare’ in English. Two years after that, the equivalent Chinese term (法律战) was explicitly included as part of China’s strategic doctrine.

Cai deflects to ‘statesmen, diplomats and international relations scholars’ whether China actually has the power to challenge the United States and whether it would want to do so (at 3). The clear implication of his book, however, is that the proper form of both questions is not whether but when — and with what consequences. The book’s genesis can in fact be traced back to EJIL and an article Cai published in these pages some seven years ago. That work was completed when he was a Fulbright Scholar in New York. Substantial parts of the longer treatment were written in Berlin under the auspices of a research group led by Professors Georg Nolte and Heike Krieger, while others were first floated in the American Journal of International Law.

The itinerary of the author and his text is significant because Cai is more effective than most in communicating the Chinese view to a non-specialist reader. Though he is on the faculty of the School of Law at Xiamen University, where he completed all three of his degrees, he clearly writes to a Western audience. There are deft nods to the Western canon, from Tom Bingham on the rule of law to David Kennedy on the turn to institutions. Not a single Chinese character appears in the book, nor a tone on the limited use of Romanization. (This can be confusing as, for example, a term like fazhi can mean rule of law (法治), legal system (法制/法律制度), or ‘made in France’ (法制/法国制造).)

And yet it is striking that, throughout the book, ‘China’ is invoked as a unitary actor and almost in the first person: ‘China is of the view…’, ‘China tries…’, ‘China seeks…’, ‘For China’s part…’ (at 4, 89, 150, 324). This articulation of China’s position is largely drawn from official statements. Indeed, most of the last two pages of the book is taken up by long excerpts from a speech by President Xi Jinping. There are occasional gestures at criticism — the opacity of China’s treaty negotiations, the use of ‘progressive compliance’ to distract from non-compliance, the lack of domestic laws to prosecute torture despite widespread reports of its practice — but, for the most part, this is a party line book.

This review essay was published in the European Journal of International Law, vol 31, pp 1507–1520 (2020). The author’s original version is available in full on SSRN.com here.