Lies, Damned Lies, and the International Rule of Law 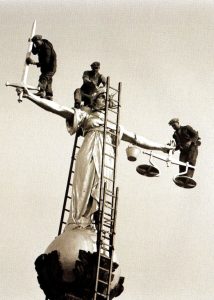 Cleaning of Justice over the Old Bailey, London, 6 January 1933

Imprecision of meaning in international law is rarely accidental. Diplomacy is an architecture of compromise, with states routinely adopting malleable or self-serving definitions depending on their interests or aspirations.

Academics, generally, prefer precision. Robert McCorquodale is to be commended for his thoughtful and thought-provoking effort to pin down what the “international rule of law” can and should mean. In particular, he is right to push back against simplistic analogies between the concept of the rule of law at the domestic and international level. The function that law plays in a notional horizontal society of equals — the sovereign equality that is the founding myth of international law — is radically different from the role it plays in a vertically ordered state in which power is distributed by reference to a sovereign or in accordance with some form of constitution.

But this structural difference also points to the problem with McCorquodale’s approach to defining the international rule of law. He generously cites my own work in this area, which he correctly identifies as seeking to offer a functionalist approach to what the rule of law might do at the international level — viz. “the application of rule of law principles to relations between states and other subjects of international law”. Such a minimalist definition of the rule of law, he notes in passing, “will suit those states which are resistant to a broader understanding of international legal obligations” (p.289). This is a curious challenge, but points to the larger concern that I have with his own maximalist (thick, substantive) conception of the rule of law as necessarily encompassing the objectives of “legal order and stability; equality of application of the law; protection of human rights; and the settlement of disputes before an independent legal body” (p.292).

This piece is a contribution to a symposium hosted by Opinio Juris entitled: “Defining the International Rule of Law–Defying Gravity?”

You can read the rest of the piece on the Opinio Juris website or on SSRN.com here.

I am not sure we are helped at all, in our efforts to secure peace and justice in the world, by abstract attempts to define int’l law. What is needed is simple: compulsory int’l dispute resolution. What is needed is a four-stage system, compulsory negotiation, compulsory mediation (which would solve 98% of all int’l conflict), compulsory arbitration, and compulsory adjudication,l with the tribunals having full access to equity (regardless of what existing “int’l law” would provide).